We are back with the written update of Star Plus serial named Imlie. The episode begins with Aditya and Imli are getting ready for Paghphera rituals. Mithi starts Paghphera rituals, she washes their feet. In Delhi, Malini is preparing food for her inlaws first time. Anu enters the house and starts shouting. Malini walks to her and asks her why she is screaming. Anu says what are you doing in the kitchen. Malini says she was cooking for her inlaws. Malini asks why are you always misbehaved with my inlaws. 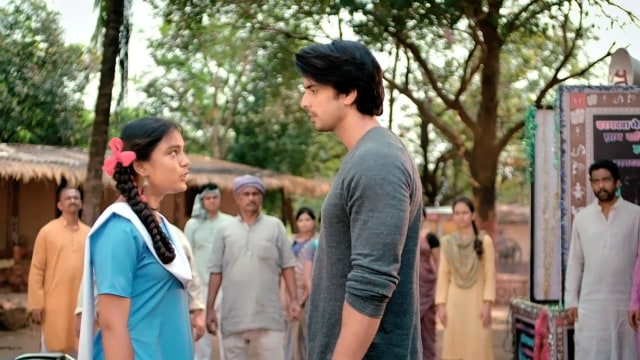 Malini inlaws come there and tell Dev that she is preparing samosa for him as he likes it. Then Dev says Anu that it’s Malini’s decision to cooking. Anu says Malini that you are going to Pagdandiya, I have booked your tickets, pack your bags soon and you have to catch the train in 4 hours. Malini asks why is she doing this. Malini says that Adi will return in 2 days then what will I do there. Aparna says Let’s sit and talk.

In Pagdandiya, Adi and Imli are performing rituals. Mithi gets emotional and says to Satyakam that it’s very difficult to be a single mother. Satyakam says don’t worry, your daughter is very happy. Mithi says god keep her hand always on her. Dulari tells Sarpanch that I guess there is something wrong between Aditya and Imli. Sarpanch says stop your bad mouth. At Tripathi house, Malini says to Anu that she always doubts Aditya, but now he is her husband and she can’t tolerate this anymore.

At Village, Paghphera rituals are going on. Mithi asks Imli to give her mangalsutra and chunri to her. Aditya says she forgets her belonging at his house. Mithi scolds Imli and says how is she forget her mangalsutra there. Dulari yells and says there is no marriage without mangalsutra. Satyakam stops her. Mithi brings a black thread and asks Aditya to tie it. Rituals ends. Mithi hugs her. In Delhi, Anu says to Malini, why are you not angry as your husband leaves you here alone. Malini says he goes there for work. And the whole family is here for taking care of her. Tomorrow is Makar Sankranti, we will celebrate together, this is my first festival after marriage. Episode ends. Don’t forget to watch Imli on Star Plus Mon-Sat at 8:30 pm. Stay tuned with us for more updates.