One of the highest TRP taking television shows, and as we all know that the show has completed 4 seasons successfully, and now the 5th season is going on very well. The show is always spreading glamour. The 5th season of the show called Naagin has always to become hot potato just because of the glamour in it. Today we will tell you about the episode which is going to be air today 22/08/2020. Here is a quick view of today’s show so be in this article till the end if you want to know something advance about the show.

In today’s show, you will watch a fight scene as always going on a fight between snakes and the eagles. The tiff between Nageshwari and Akesh goes on fighting and their tiff is taking lives. Here is the twist that comes when the eagle men killed hridya the second Naag and try to take Nageshwari with her, but before that Nageshwari comes in her real character of Naagin and again the tiff starts between both. Because this is the second time they met as this is the rebirth of them so Nageshwari says to Akesh that “Mene Tujhpe Rehem Kiya or Tune Uska Faayda Uthaya” than she again grabs him in her tale and through him into the trench.

Then she thought that she left the Hridya there and he is about to die. Then suddenly Lord Shiva enters and blessed her up by saying that I’m so happy and the boon which I’ve given to you that all of your Naags will be able to reborn and become ichadhari but you will not. After saying this lord disappears. On that Nageshwari says that I will take rebirth to take your revenge and put the dagger in herself and killed her. She was telling the story about this incident in her Rebirth.

Now as we all know that this is the rebirth of our beautiful Naagin and she has decided to take revenge to Akesh wherever he is she will find and take my revenge by killing him and the episode goes off, we would like to tell you one more thing that in this as you will be watching Hina Khan but soon her role is about to end and the new face you will watch is Surbhi Chandna. So if you want to know more about the show so stay tuned with us we will let you know before the time… 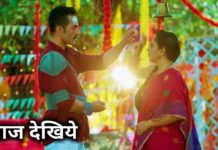 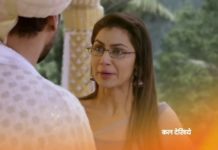