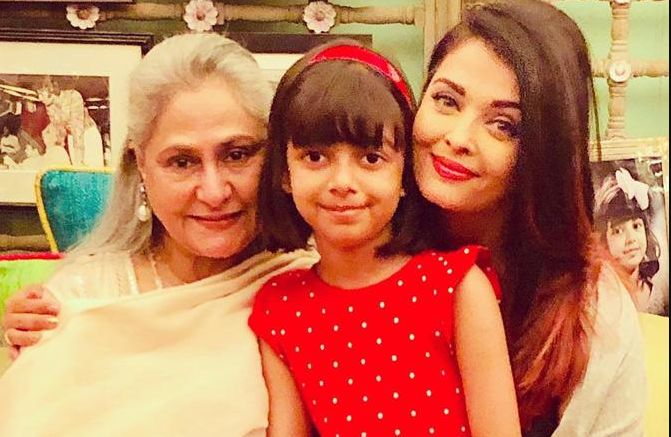 The contemporary Bollywood actress, Aishwarya Rai Bachchan, shared a pic of her with her mother-in-law, Jaya Bachchan and her daughter, Aaradhya Bachchan, on her official page of the Instagram account and she presented a caption in her insta pic along with the pics, and she writes here, “Happiness always.”

As of now, on the working row, Aishwarya Rai is signed to do the next film of the movie director, Mani Ratnam next.

The media house, DNA report quoted that. “it shall be a big budget periodic movie, that shall be going to be a bilingual project and will feature several big names of the South Indian film industry.”

The Bollywood movie actress of the modern and the contemporary time is regarded as one of the most popular and big name of Bollywood.

Post winning the Miss World pageant, in 1994, she marked her acting debut with the Kollywood movie, Iruvar, in 1997, which was interesting, directed by the famous movie director, Mani Ratnam, so it shall be really yet to see now, when the movie actress, Aishwarya Rai, will again work with the filmmaker, of the Indian cinema, Mani Ratnam, and her another film, Ravan was also directed by the movie director, Mani Ratnam, in which she was paired up with her husband, Abhishek Bachchan and the South Indian actor, Vikram.

Last time, the movie actress of the Hindi cinema of the modern and the contemporary times, Aishwarya Rai Bachchan, is regarded as one of the most popular, prominent, talented and skilled actresses of the Bollywood is blessed with working in the comedy-drama, Fanney Khan.

In the Bollywood movie, Fanney Khan, the Bollywood actress, Aishwarya Rai Bachchan, shared screen space with the senior actor, Anil Kapoor and the modern B-Town actor, Raj Kumar Rao and the film Fanney Khan was also well liked by the audiences’ and the fans.